Pacquiao vs Mosley - The Tale of The Tape 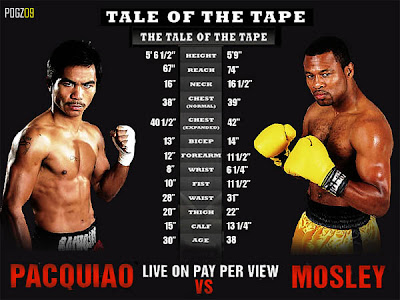 Manny Pacquiao has been installed as an odds-on favorite for his WBO welterweight title defense against Shane Mosley but the Filipino has taken great pains not to underestimate his American challenger.
While Pacquiao is already acknowledged as one of the best offensive fighters of all time, he said on Wednesday he had not prepared for a fight in such intense fashion since he took on 10-time world champion Oscar De La Hoya three years ago.