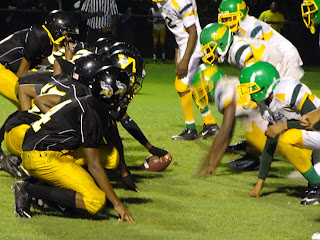 — The clock has run out on a 40-year-old private city youth football league that has been the training ground for several future National Football League players.

But now the city will switch to a football/cheerleading program run by former NFL players – also former Packer Rattlers – who say they will offer a more complete program.

"I understand what it's like to be a kid in this community," said Jerome McDougle, who played for the Philadelphia Eagles and the New York Giants, and whose McDougle Family Foundation is taking over the city's football program.

He'll be working with his brother, Stockar McDougle, who has played with the Detroit Lions, the Jacksonville Jaguars and and the Miami Dolphins.


"My brother and I had the opportunity to get to the highest level in our craft and a lot of people look up to us," Jerome McDougle said.

City leaders say they expect the McDougle Foundation will take in the 300-plus players and cheerleaders who have participated with the Packer Rattlers and the city-run football league, the Deerfield Beach Raiders. Everyone will benefit, they say, because the new league will have professional experience in critical issues such head injuries and leadership-building.

City Manager Burgess Hanson said it isn't so much what the Packer Rattlers lack, but what the McDougle Foundation can offer.

"On the staff, we have Ryan Reckley, graduate and football standout from Boston College and we also have the McDougle brothers, Desmond Cook, a Stanford University standout" from Sunrise, Hanson said. "That's the type of team you want to put in on something like this."

"They have a very strong history of trying to promote good values with the kids in the community," Preston said. "A long time ago, people conceived of an idea, had the fortitude to stick to it and see it become a reality. It is something that is really uplifting."

Diandra Tigner, another resident, said she couldn't understand why the city was starting from scratch.

"Everything they are trying to do, we're already doing it," she said. "Some of these guys, they are father figures. If you take this program away, who are they going to look up to?"

Commissioner Gloria Battle, who spoke in favor of the change, said there's little doubt the Packer Rattlers have a long and storied history in the city.

"Packer Rattlers was an outstanding organization during its infancy," she said. "But it has devolved into something that parents don't want to send their kids to."

She said she routinely receives complaints from parents about how their young children are getting suited up, but don't get a chance to play or cheer.

"My concern is for the children," she said, recalling one parent of a pre-teen being told she was "too chunky" to cheer. "My heart bleeds every time."

Packer Rattler officials could not be reached for comment on this issue, but at the meeting they said the city's decision means the league will lose priority on city fields. And that will almost certainly mean game over for a Deerfield institution.

"We put hard work into this organization and if you allow this, it's going to go away," said Precious Johnson, who said she's been on the Packer Rattlers board of directors for four years. "