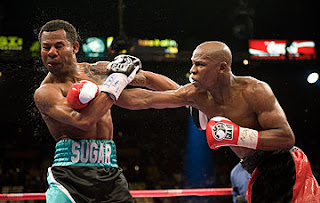 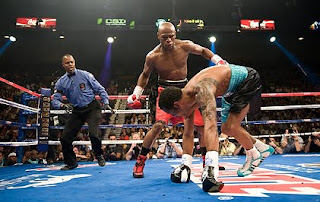 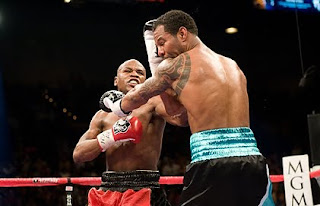 I was getting pretty hype for this fight and trust me it's been a minute for a fight to get the masses hype meter up !!

The question was "Who R U Picking?" and after twelve rounds it was apparent that "Sugar" Shane Mosley picked the wrong fighter to step in the ring with on Saturday night in front of 15,117 at MGM Grand Garden in Las Vegas, NV. A bevy of celebrities ranging from Jay-Z and Gov. Arnold Schwarzenegger to Muhammad Ali and Mike Tyson witnessed arguably this era’s greatest fighter as Floyd "Money" Mayweather Jr. turned in a virtuoso performance as he defeated Mosley by unanimous decision in their highly anticipated welterweight bout.
It was a performance that featured high drama in the second round – something that skeptics claim has kept Mayweather away from greatness – when a Mosley right hand nearly floored Mayweather and had the six time world champion on very shaky legs. But Mayweather survived the brief scare, settled into his rhythm and soundly throttled Mosley with lopsided scores of 119-109 (twice) and 118-110. In conclusion Mr . Floyd did his thing !!
Posted by Le'Nalors at 5:53 PM