Floyd Mayweather versus Victor Oritz .. Who you Got?? 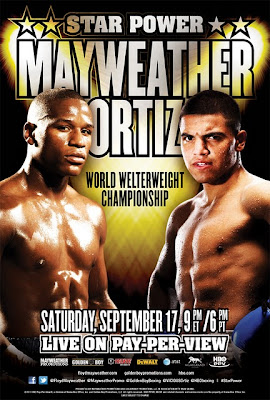 Floyd Mayweather versus Victor Oritz is a WBC welterweight title fight scheduled for Sept. 17 at the MGM Grand in Las Vegas. Ortiz won the belt by defeating Andre Berto in April, and will be defending it for the first time.
Mayweather, a former Ring Magazine welterweight world champion, will be fighting for the first time since May 1, 2010, when he defeated Shane Mosley. Now the prediction ... I have Floyd in 12