The Le'nalors Memorial Weekend Event Update " Best of The Best 2013 " 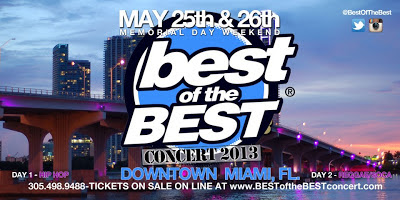 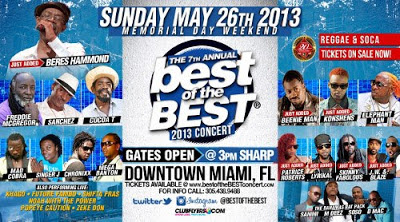 Held every Memorial Day weekend in downtown Miami since 2007, Best of the Best is one of the only annual fests in the U.S. that puts the emphasis squarely on dancehall, and it's certainly the largest. After taking on more and more hip-hop acts in the past few editions, this year's festival returns to its roots with a strictly Caribbean lineup.

"Best of the Best started as a reggae, dancehall, and soca show," promoter Joseph "Joey Budafuco" Louis Jr. says. "But the intent has always been to integrate different genres of music to draw a more culturally diverse crowd.

"The show became so popular with the urban, hip-hop audience that we were approached by Radio One to put on the first two-day Best of the Best Concert [in 2011], and Best of the Best 2013 was initially supposed to continue as a two-day show. We were in talks with several hip-hop and R&B acts. But by the time they confirmed, it was too late to adequately promote that show."