Who wants some Hennessey for 2011 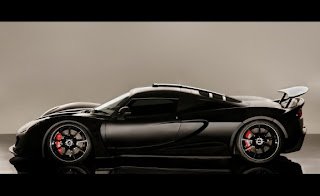 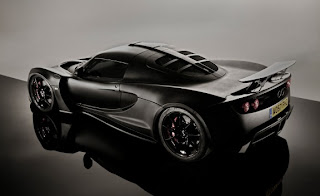 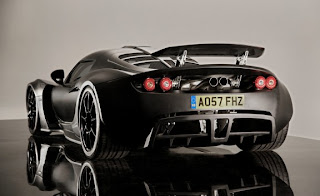 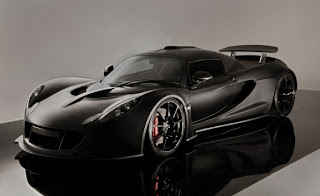 Since 1991, Hennessey Performance Engineering has been in the business of taking crazy-fast cars such as Dodge Vipers, Ford GTs, and Chevrolet Corvettes and turning them into tire-melting monsters for only the most talented (and well-heeled) of drivers. But these may all have been mere warm-up acts for its wildest and most unique supercar ever, the upcoming Venom GT.
The Venom GT looks like a spooky, matte-black Lotus Exige because that’s what it is. Well, a lowered Lotus Exige widened by 12 inches, stretched by 18 inches, and powered by the awesome, supercharged LS9 V-8 that powers the brutal Chevrolet Corvette ZR1. Once you’ve got your head around the output of the tweaked LS9, which ranges from 725 to 1200 hp, consider that the car is expected to weigh only 2400 pounds. Carbon fiber is employed for much of the body and all four wheels, the latter wrapped in pricey, steam-roller-wide Michelin Pilot Sport PS2 rubber. Bringing the Venom GT down from the fighter-jet speeds it should easily attain are huge 15-inch rotors clamped by six-piston Brembo calipers in the front and four-piston binders in the rear.
The whole idea of this car is ridiculous, but Hennessey has proven that his team can pull this kind of stunt off before, with super-blown Vipers that actually manage to reliably get their power to the ground in a (relatively) usable way. Hennessey says he has yet to test the prototype pictured here, so he didn’t offer any performance estimates. But even in base 725-hp form, we expect the Venom GT to be one of the quickest vehicles to which we’ve ever strapped test gear, provided the PS2s can actually get the power to the ground. He also declined to provide the exact amount he plans to charge for one, but has said it will be upwards of $600,000. Yup. All five of those zeroes are intentional.
Unlike most Hennessey creations, nearly all of which are built at the company’s Sealy, Texas, headquarters, the Venom GT will be completed in Silverstone, England. Ten will be built per annum, with fully assembled engines being shipped from the Texas facility. Owners will be offered a one-day instructional course from a Hennessey pro driver on how not to kill themselves the first time they slide the thing into gear.
The first public appearance of the Venom GT in the U.S. is expected to happen this August at the annual gathering of mighty collectibles in Pebble Beach. If we haven’t already by then, we will use that opportunity to take a closer look at this most venomous of Hennessey’s creations to date. But rest assured, we will do everything in our power to get into it sooner than that, and bring you all the juicy details, driving impressions, and test numbers. Stay tuned.
Posted by Le'Nalors at 12:30 PM