The Le'Nalors Fight Preview Cotto vs Margarito 2 Take Your Pick 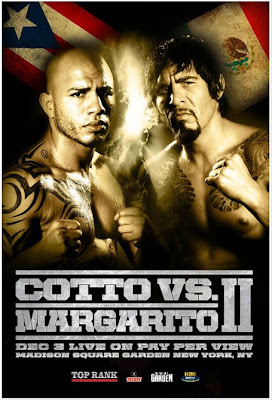 Miguel Cotto will face Antonio Margarito on Dec. 3 at Madison Square Garden in New York. Cotto is putting his WBA and WBB junior middleweight world titles on the line, though Cotto is considered a "super champion" by the WBA, and the organization considers Austin Trout its regular champion and Anthony Mundine the interim champion.
The fight is a rematch of a controversial 2008 bout, when Margarito handed Cotto his first professional loss. Margarito forced Cotto's corner to throw in the towel in the 11th round. Margarito was ahead on two of the three scorecards at the time of the stoppage, but later came under suspicion due to his use of illegal hand wraps in a later fight against Shane Mosely. Margarito is coming off a loss to Manny Pacquiao in 2010, while Cotto has won his past two fights after losing to Pacquiao in 2009.Now my Prediction .... I have to go with Cotto .. and I think it's gonna get Ugly ...So Cotto in 8th round TKO