The Le'Nalors Friday Best " Top 5 Boxing Heavyweights of All Time " 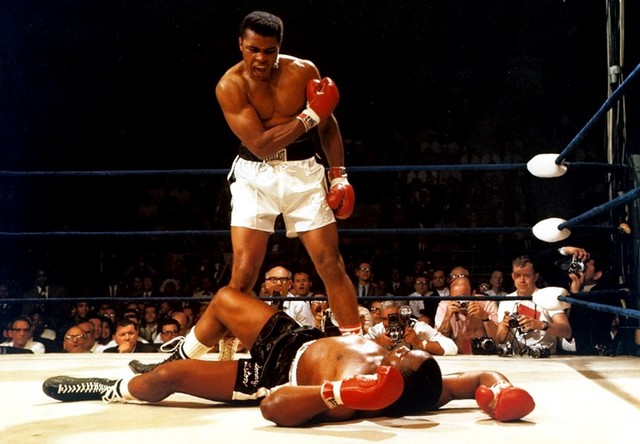 This week Friday Best is Dedicated to my Favorite Boxing Heavyweights of All Time ! My top list is always open to a friendly debate.So if you have a top 5 feel free to drop yours in the comment section!

#1 Muhammad Ali-56-5-0-(37) -
In terms of social and historical impact no one even comes close. However, what really puts Ali number one all time is his quality of opposition. Many people consider the 1970’s the best decade in the division’s history and Ali proved beyond a doubt that he was the finest fighter of that or perhaps any generation. Ali holds victories over Joe Frazier (twice), Sonny Liston (twice), Floyd Patterson, Ken Norton (twice), as well as a knockout victory over a prime George Foreman. In total Ali made 21 title defenses during his three reigns as heavyweight champion. Over the course of his prolific career Ali went from being one of the most hated public figures in American to one of the most beloved, speaking volumes about his accomplishments both in and out of the ring.

#2 Joe Louis-66-3-0-(52)-1 no contest -
America’s first national black sporting hero revolutionized what it meant to be a heavyweight champion. Louis brought a level of talent, skill, and size that made him an unbeatable force during his record breaking twelve years as heavyweight champion. His mind boggling 25 title defenses is a record that will probably never be broken. In one of the major sporting events of the 20th century Louis avenged an earlier defeat against the German Max Schmeling in 1938. With the world on the cusp of war, Louis is given credit for boosting the moral of the nation, as well as helping to debunk Hitler’s myth of Arian supremacy. What prevents Louis from securing the number one spot was his sometimes mediocre opposition, which was unflatteringly dubbed the “bum of the month club”. Nevertheless, the social barriers Louis broke for African American fighters cannot be ignored.

#3 Joe Frazier-32-4-1-(27) -
The very definition of a true professional prizefighter. Frazier had a stellar amateur career, which culminated by capturing Olympic gold in 1964. “Smokin’ Joe” gradually emerged as a top contender in the 1960’s by beating a plethora of very good heavyweights, including George Chuvalo and Oscar Bonavena. When Muhammad Ali was stripped of his championship and sent to prison for refusing the draft, Frazier won the vacant NYSAC title from Buster Mathis (KO-11) and the WBC & WBA titles from Jimmy Ellis (KO-5). In arguably the biggest fight in boxing history Frazier won a sensational battle against Ali, knocking him down in the 15th round. Frazier’s only career losses came against George Foreman (twice) and Ali (twice).

#4 Larry Holmes-69-6-0-(44) -
Easily the most underrated heavyweight champion of all-time. Holmes was the complete package, as he had fantastic boxing skills but also proved many times that he had the heart and toughness of a champion. After winning the title from Ken Norton in an all-time great slugfest, he would go on to make 20 title defenses, second only to Louis’ twenty-five. Holmes had one of the greatest jabs in boxing history and used it to go undefeated in the first 48 fights of his career, including victories over Gerry Cooney, Tim Witherspoon, Mike Weaver, and Ernie Shavers. He spent most of his career lost in the long shadow cast by Muhammad Ali, but Holmes’ accomplishments and consistency makes his resume one of the best in division history.

Let's not forget all the success Mike had during his time in between the ropes. Tyson had a career record of 50-6-0-2, and his career spanned over 20 years from 1985-2005. He would have accumulated more fights if it wasn't for his prison sentence in the early 1990's. Mike Tyson won 44 of his 50 fights by way of knock out.
Mike Tyson knocked out Trevor Berbick in the second round in 1986 to become the youngest heavyweight champion in the history of professional boxing. Mike Tyson dominated his way through heavyweight ranks with his tremendous punching power. His ability to overpower his opponent was like none we have ever seen in the sport.
Mike Tyson was undefeated, posting a 37-0 record before he lost his first fight and his title to Buster Douglas in the 1990 fight in Japan.